started a topic 22 days ago

I know I've been posting quite a bit lately, but it's really with the intention of seeing HRD get better and try to help. I don't do it to embarrass anyone, or to just complain without trying to offer a solution or as much information as I can. If I'm doing something wrong, then please set me straight :)

Which brings me to the HRD Award Tracking in particular to LOTW & paper QSL's that have been Granted. HRD typically shows a lot lower count of Granted (Awarded) QSO's than is actually in the LOTW database or with Club Log. So lets look at the HRD award matrix for a few of my contacts:

As you can see, Club Log has correctly given me credit for all the Rotuma QSL's as Verified. So why the difference? One thing is that Club Log allows you to Sync your log uploaded to their site with LOTW. And once you have done that, it will properly fill in the matrix to show what QSL's you have been given credit for.

I know you can manually go in and change the log entries to show a Granted status, but that seems like a lot of work. Dave, AA6YQ posted a link to a developer page on LOTW that will easily allow you to do a Query for all the QSO's that have been granted award credits, and what those credits are for. It's returned as a .ADI file and looks like this:

Here is the LOTW developers page for reference:

I'm not 100% positive, but it would seem that Club Log uses this query for populating their award matrix also. Hopefully the team at HRD might be able to use this to make our award tracking much easier.

I'm going to put up some images here. But there are a few things worth explaining.

The awards-tracking in Ham Radio Deluxe Logbook is basically a "calculator" or counter. For any value of DXCC - let's go with 460 (Rotuma) - the awards goes and counts the number of occurrences of "DXCC=460" in the log by Mixed, Mode, and Band (DXCC is just the algebraic sum of the "band slots" for current countries)... and by Worked, Confirmed, Not Confirmed ("Need QSL"), Entities Needed, Not Submitted, Submitted, and Granted.

The difference in these columns is described here: 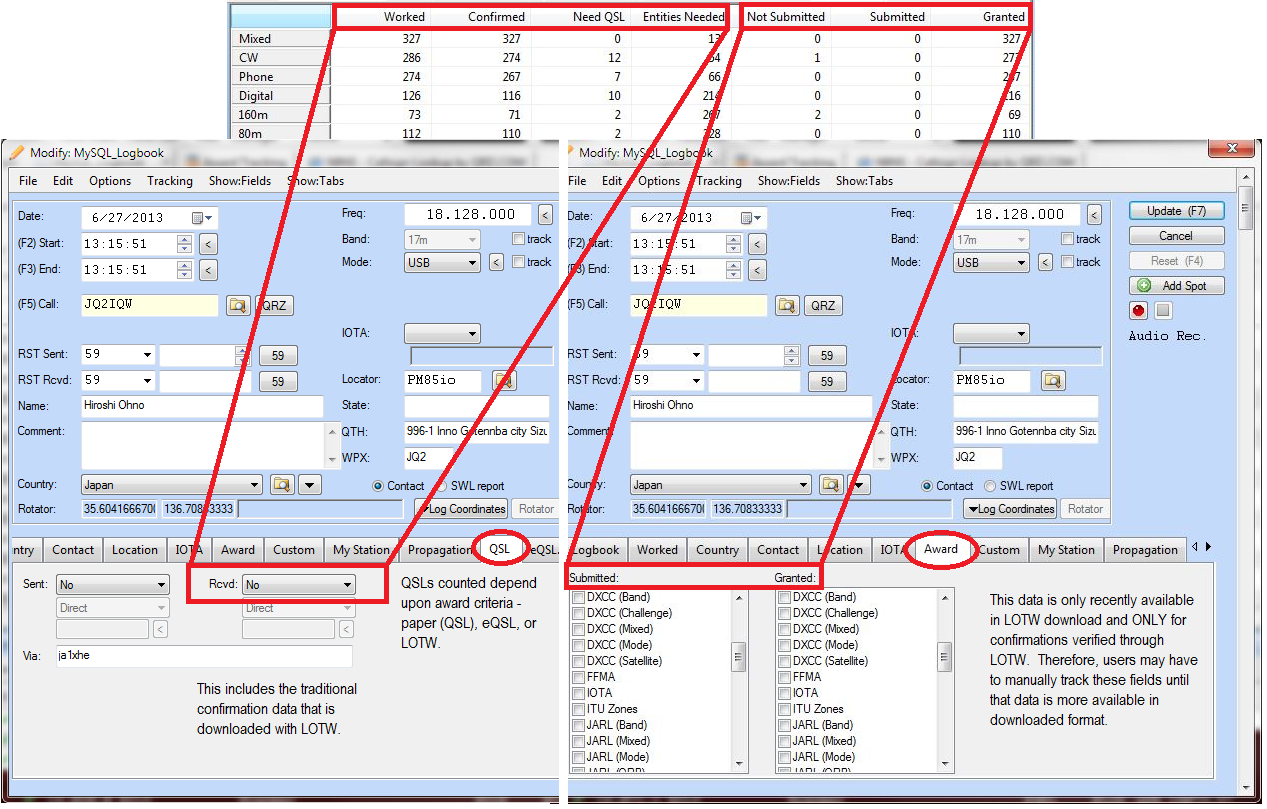 Comparing Ham Radio Deluxe Logbook, LOTW, and Clublog... looks like this (sorry for the large image):

Comparing the matrixes like this (apologies again for the small image; I'll see if I can attach them also).

The only real difference here is that Ham Radio Deluxe Logbook and LOTW both use the value of "Granted" (that is - "Granted" has been through the awards process and will show up as an "X" in your LOTW matrix.

Your totals should match. Here are some additional hints:

1. if the counts don't add up, then there is a short list of reasons

a. not all the confirmations or award credits have been downloaded from LOTW; in this case, change the date for the beginning of the download back to your earliest QSO to be sure you're downloading all your confirmations

b. paper QSL cards are not updated for the corresponding QSOs

2. the awards totals in Logbook can be "drilled"; In other words, you can double-click the numbers and eventually get down to the detail; this enables you to get to see which QSOs (or confirmations) are in your count

Hi Mike. Thanks for posting those details, and I'm pretty sure I understand the difference between Worked, Confirmed, Verified, and Granted. And you are right, in thinking back to my 3D2R confirmations I'm pretty sure I submitted the card with multiple QSO's through our local card checker first, so that's why the majority of those QSO's don't show up as Granted. Of the one contact in the matrix for 20M, that was with 3D2RX and it was confirmed via LOTW.

The problem is that to go through all of my QSO's that haven't been given Granted status just because they were confirmed via a card instead of going through LOTW is going to be a considerable amount of work. And what I'm saying, it doesn't have to be. Again, look at the query I pulled from LOTW:

Let's go to the top one on the list, 3D2R CW on 80M. One that was submitted via a card checker, and one I have been given credit for. You can see in the APP_LOTW_CREDIT_GRANTED column it shows I was granted credit for DXCC Mixed, DXCC Mixed Honor Roll, DXCC CW, DXCC CW Honor Roll, DXCC-80, DXCC Challenge, and 5B DXCC credit.  All the information you would need to populate those fields in HRD automatically so we wouldn't have to do it manually.

In one of your diagrams you wrote: "This data is only recently available in LOTW download and ONLY for confirmations verified through LOTW. Therefore, users may have to manually track these fields until that data is more available in downloaded format." It is now, so the ball is back in your court :)

This is posted on the Clublog site concerning their LOTW syncing proceedure: "Where a QSO has been awarded as part of a DXCC application in the past, you'll also see it appears as a blue 'V' in your DXCC charts" So according to them, they actually do track the award status.

The only status that comes from LOTW is "V" for a confirmed QSO - regardless of whether it has been part of an application or not.

I upload them to Clublog regularly after receiving the confirmations via LOTW... but I only do a LOTW application in early December of each year. 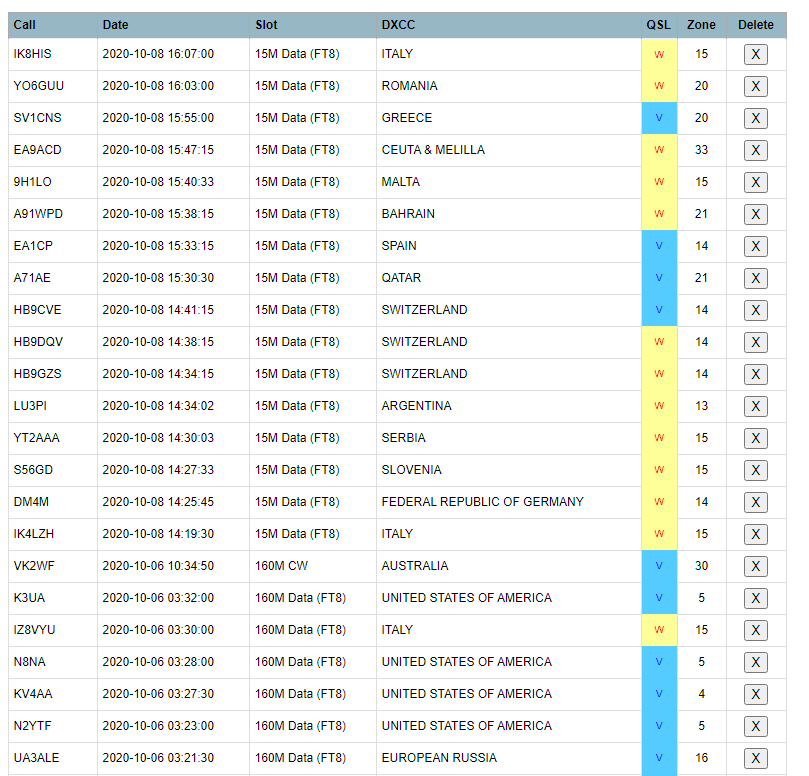 This is from earlier today. All the LOTW confirmations are "V"... and none of them have been included in a LOTW application. In fact, I've already been awarded most of these in LOTW (ie. several from the USA here). So no... Clublog is not able to tell whether or not they have been part of an application. Clublog does differentiate between LOTW confirmations (V) and physical QSL cards (C).

As for that "DXCC QSLs download file"... there's a 0.00000% chance we'll be supporting that. It's not specific enough and it's highly inaccurate and filled with useless information.

Just looking at the screenshot of the one you posted... every single QSO shows as Granted for "DXCC-M". Every single one? You've got four QSOs with five different callsigns with "Kingdom of Eswatini"... and ALL of them have been granted award credit for DXCC Mixed? Nah. No way. It only takes 1 to get granted award credit for a country. And the way Logbook awards work, it counts the number of records that match each DXCC country. This would cause a whole lot of work for folks to clean up the mess created. Further, there's no ADIF compliant "MODE" field in here... and their APP_LOTW_MODEGROUP doesn't match the ADIF specs for mode. We looked at it. It's WAY too much of a  mess.

I actually tried to figure out if I could transform the file into something useful. But it's just too full of problems.

For me, even after 40 years of DXCC activity, it was far easier to just pull the report out of LOTW (by mixed, band, mode)... and manually update the credits that were submitted via an "old-style paper QSL card application." It took me about 3 hrs... but it was worth the effort

Mike, I think it is given you credit for DXCC-M for that country based if it was the only QSO in the list. So if you parsed it, I would just count it as a duplicate and move on. Even if it put the checkmark in the Mixed field again, no big deal because the first one would have done that anyway. It would still only count once but once the totals were completed, wouldn't it still be accurate? And using my top Rotuma contact as an example, the APP_LOTW_CREDIT_GRANTED field shows one of the fields as DXCC-CW, and most likely the DXCC-CW-HR is for Honor Roll credit if I ever get there :) So couldn't that be used for the mode parse? Also, according to the LOTW developer page for the query, it states for the APP_LOTW_MODEGROUP field "The mode group indicates whether the QSO's mode counts towards the CW, Phone or Digital awards respectively in the DXCC program".

As far as Clublog goes, you are correct Mike. After doing another comparison to what Clublog showed as Verified (and they say also granted), that is not really the case. All it actually shows is a LOTW confirmation instead of the granted status.

But I'm not going to push on this anymore. I was just trying to see if there was a way to use that query to automatically populate the Granted fields for the users instead of the tedium of doing it manually. It seems to me it's possible, but I know it would take a lot of work to parse the fields and make sure everything was accurate. Perhaps in the future, there will be better tools from LOTW to help developers with Award tracking.